Teslim Balogun, a Nigerian center-forward, joined the club six years after Tommy Best, Queens Park Ranger’s first-ever black player, left.
Balogun, who was born in Lagos on March 27, 1931, would be a pioneer for African footballers, as the 6ft 2in striker would go on to become Nigeria’s first professional footballer and trained football coach. Throughout his career, he, like Best, created the groundwork for future generations of black players.

Balogun had to follow a unique path to become the R’s second black footballer.
The young center-forward played for a variety of clubs in Nigeria as a schoolboy, including St.Catholic Mary’s School, Marine Athletic Club, and Railway Athletic Club. This was when his passion for football grew, and his powerful shot became well-known across Lagos.
As a result, he was quickly dubbed ‘Thunder’ and ‘Balinga,’ and the nicknames would stick with him throughout his football career.
Balogun, who worked as a letterpress printer, moved to England in 1955 to study at the London School of Printing.
However, on his way to England, he was introduced to George Swindin, the manager of Peterborough United, by the Nigerian FA’s secretary.
Balogun’s English footballing dream had begun after he was offered a trial with United.
Despite still living in London, the center striker was unable to make an appearance after a season with the Posh and joined Skegness Town.
Traveling from London to Skegness had become too difficult in a matter of months, and the center-forward requested to be released.

Balogun’s footballing spirit was not dampened, and in a quest to stay fit in Paddington, the center forward’s footballing goals were ultimately realized.
Balogun met a Queens Park Rangers fan, who introduced him to the club’s manager, Jack Taylor.
Taylor agreed to sign the Nigerian after meeting with him, providing the west London club with much-needed firepower upfront for the 1956/57 season.
Balogun made his competitive debut for the Third Division R’s on October 13, 1956, scoring a header in a 3-1 home win over local rivals Watford.
That season, he scored seven goals in 16 games while playing with a number of legendary QPR players, including goalkeeper Ron Springett and Tony Ingham, Queen Park Rangers’ all-time appearance leader.
Balogun only stayed at Rangers for a single season before leaving for non-league club Holbeach United before returning to Nigeria.
“I shall always be grateful to Mr. Taylor and the Rangers’ Directors for the chance they gave me,” the center-forward said many years later, reflecting on his time in W12.
“And I can’t say enough good things about the Rangers’ fans.” “I’ve had the feeling they’ve been with me since the beginning.”
He won six caps for the Nigerian national team throughout his football career, making him the first-ever Nigerian professional footballer and a role model for future generations of aspiring Nigerian footballers. 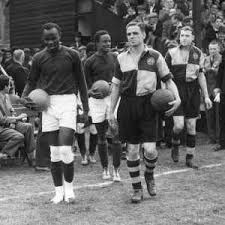 Balogun would break another racial record after retiring from playing football, becoming Africa’s first-ever qualified football coach, and leading his country to the 1968 Summer Olympics.
Balogun died at the age of 45 on July 30, 1972. His illustrious name, on the other hand, lives on in more ways than one.
The former striker now has a multi-use stadium named after him in his hometown of Lagos, ensuring that his legacy lives on.
The Teslim Balogun Stadium in Surulere, Lagos, is mostly utilized for football matches and hosts First Bank FC as well as certain Nigerian national team youth games.
The stadium’s construction began in 1984 and was completed 23 years later, in 2007.
In addition, following his death, the Teslim Balogun Foundation was established to aid families of Nigerian ex-international footballers who have fallen on hard times, guaranteeing that the Teslim Balogun name lives on.